Click on photo for details.    Use the 4 letter code when referring to items. 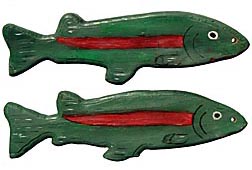 Here are two painted wooden fish decoys. They were cut from 3/4" boards and shaped with a router, then painted in greens, red, white, and black. Each is painted a little differently, and each has a hole through the front for a line to be attached. They range from 12" to 12 1/2" long, and from about 3 1/2" to 4" high. While not extremely old, they do show some oxidation and weathering from age and use. THOC is in very good, used condition. The other (THOT) was broken and reglued at the bottom of the fin and the bottom tip of the tail. They are priced at $75.00 each. Inventory Codes: TOHC and TOHT.   Fish decoys ... The other side ... From above ... Front view ... Back view ... From below.
Closeup, TOHC ... TOHC, other side ... Closeup TOHT ... TOHT, other side. 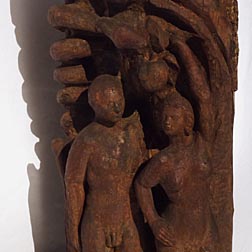 This is a very detailed model house with accurately carved construction details, a heavy wire fence, and yard. It is also a birdhouse. It includes a carved chair and sofa on the porch. All the downstairs windows have what seems to be pictures of windows taken from magazines. These are mounted behind thin clear plastic. The fence likely was cut from a larger piece of wire mesh. The gate swings open and closed. The base (yard) is pine and the rest is a combination of pine and crate wood. The overall condition is very good - especially for the age, likely about the 1940's, and the outdoor use. However there is some slight loss to the top of the chimney and a bit of the back right roof corner was split off years ago. The entire house, yard, and fence has been painted, with no sign of repaint or overpaint. There is some natural aging, crazing, and wear in the paint. The yard is 14 3/4" by 19 1/2"; the house 13 1/2" by 11" and 9 1/2" high to the ridge. The price is $475.00. Inventory Code: AKHO. Folk art birdhouse ... Front view ... One side ... The other side ... Closeup ... Another closeup of front ... Closeup from above, gate open ... Top view ... Back view.

This an extraordinary, one of a kind, folk art piece. It is a very large, extremely detailed marquetry whimsey with a fraternal theme; including many carved and inlaid elements. This has so much intricate work that more things continue be seen and be appreciated even after several viewings. We have included many pictures that will convey some of the quality of this piece; however, it will still surprise and delight even more, when held in person.

Following is just a brief description of some of what is in this piece. To be complete would take more than reasonable here. Please let your eyes tell more of the story. This work is over 49" long, 5 1/2" wide, and over 1 1/4" deep in parts. It is decorated on the sides as well as the front. It includes Crosses, Ankhs, stars, hearts, Bibles, scrolls, spears, and other Masonic, Shriner, Eastern Star, and Odd Fellows symbols. Each section is held together with carved links; and the entire carving is made from one piece of wood. There is one carved ball in cage, relief carving, and a section inlaid with bone or ivory. There are inlaid words, and letters; and it is decorated with a multitude of symbology. This piece is in extremely good condition; although not completely "perfect". There is a slight crack in one link, and one has been reglued in part. There is also a little bit of red color which is on the lowest section. There is no loss that we can see. One section has hand painted the words "Memorial Day 1947". We would date it from that time. The back is inscribed "To Vernon Thompson for Mike". The price is $1250.00. Inventory Code: TSOH.   Inlaid fraternal whimsey ... Closeup of top section ... Another view ... Side view.
Second section: Front view ... Closeup ... Another closeup ... One side ... The other side.
Third section: Front view ... One side ... The other side.
Fourth section: Front view ... One side ... Another view ... The other side.
Bottom section: Front view ... Closeup ... Another closeup ... One side ... The other side.
The back: Upper back ... Middle back ... Lower back ... Closeup of inscription. 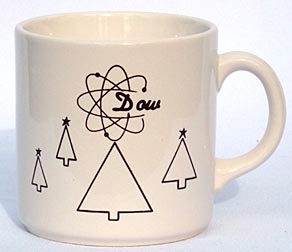 This is a score keeper, home made from a plywood paddle with wood burned markings and two carved pointers that turn. Each pointer is mounted in a circle with numbers around the outside. One circle is labeled "Gold A Red" and the other is "Silver B Black". It has a varnish finish that is fairly worn at one end. The size is 14 1/2" long by 5 1/4" wide by about 1" thick at the pointers. It was probably made in the 1940's or 50's and is in good condition with wear from use. The price is $110.00. Inventory Code: CAPC.   Home made score keeper ... With pointers moved ... Side view ... From below ... Back view ... Back, another angle ... With a soda can for scale.
Some much larger photos:   Home made score keeper ... With pointers moved ... Back view. 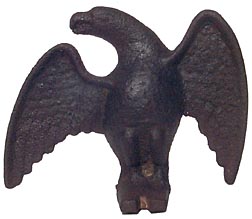 An extraordinary Metal man, about 4 feet high and 39" wide, made from found objects, including chains, fuel pump for heart, distributor, springs, reflectors, gears, and more. He was a mailbox holder. This sculpture came from New Hampshire, and was made in the 1950's. It is in excellent, older condition, with beautiful old polychrome paint. The price is $3,500.00. Inventory code: ASRP. Image ... Closeup of head ... Back view ... Closeup of body ... Closeup of arms and legs ... Closeup of head and upper torso. 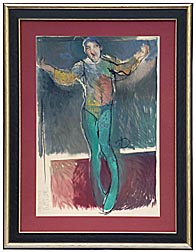 This is a large painting titled "Acrobat", signed with initials that appear to be "CV". It appears to be done in acrylic and pen and ink, matted and framed under plexiglass. The image area is about 28" high by 18" wide. The dimensions of the frame are 39" by 30". It is in excellent condition. We have no indication of the age, but it was probably done in the late 20th c. or early 2000's. We have a second painting by the same artist below. The price is $400.00. Inventory Code: CHPR.   "Acrobat" ... Closeup ... With a soda can for scale.
Some much larger photos:   "Acrobat" ... Closeup ... With a soda can for scale. 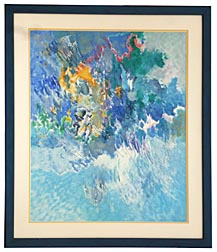 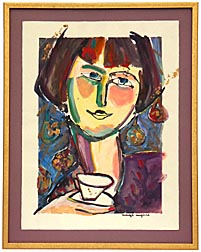 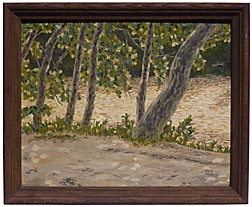